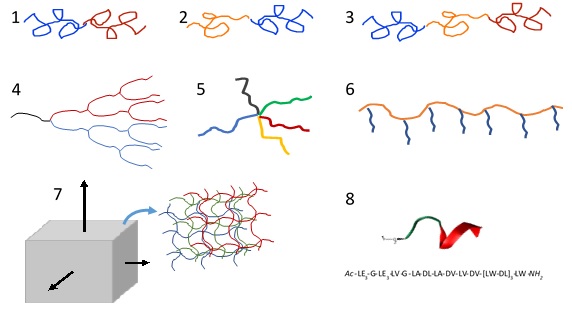 Amphiphilic block copolymers are able to self-assemble in aqueous media into several morphologies such as spherical micelles, cylindrical micelles (worms) and vesicles (polymersomes). The latter ones (micro- or nanometer-sized hollow spheres with a polymer membrane) are of special interest for biomedical applications, including drug delivery, nanoreactors, cell mimics or theranostics. In this respect, we synthesize novel biocompatible amphiphilic di- or triblock copolymers, employing different polymerization methods such as radical (ATRP, RAFT), ionic (anionic and cationic ROP) and metal-catalysed polymerizations (ROMP). Hence, offering a large variety of chemical features, functionalities and properties. Our expertise lies in the development of polymer systems that enable the insertion of biopores into the membrane and the encapsulation of biologically relevant substrates (enzymes), the most prominent example being PDMS-b-PMOXA.

Specific functions are targeted by using stimuli-responsive blocks that react to light, temperature, redox potential or pH changes, or by end group modification with several moieties. Self-assembly of aforementioned copolymers leads to the formation of nanoparticles that can be loaded with cargo and release the it upon external stimuli such as delivery of glucose using pH responsive polymersomes, with dyes, DNA, or other target groups for various biomedical applications.

Additional competences involve the development of polymeric pervaporation membranes based on the synthesis of tailor-made block copolymers, the study of their different morphologies during self-assembly and the correlation with the membrane transport properties as well as on the syntheses of anisotropic hydrogels based on simple building blocks and the investigation on their mechanical properties and finally, on polymer networks such as ion responsive microgels and fibres allowing potential applications in actuation and tissue regeneration.